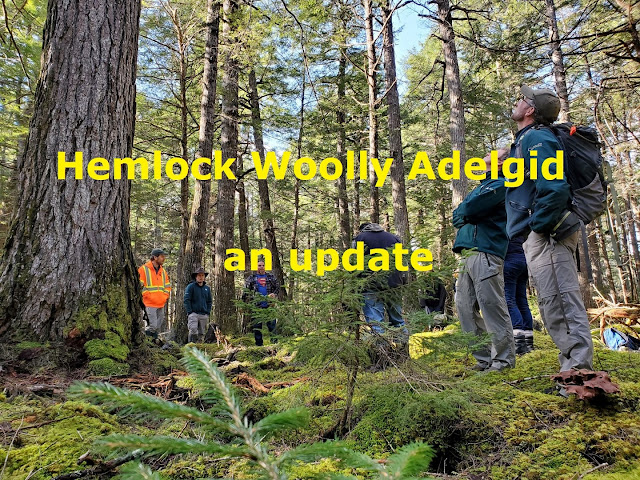 This post is an update about the bug, efforts being made to control it and specific actions for you.

Where is HWA in Nova Scotia? 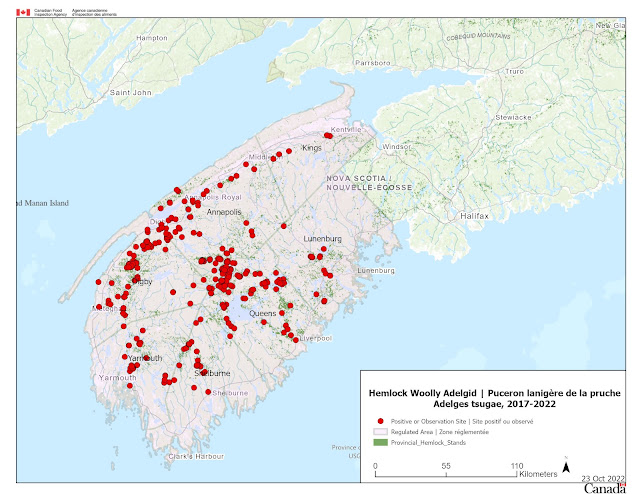 The map above shows red dots where HWA has been confirmed in Nova Scotia.  The same map from two years ago confirms HWA making a rapid march from west to east across the province.  In just two years, Lunenburg and Kings County have infestations and the Canadian Food Inspection Agency has added these counties to their restrictions on the movement of hemlock.

For a tiny insect that lives most of its life in a stationary state, incapable of moving from its feeding station at the base of a hemlock needle, the species sure does get around!

The map only shows where the bug has been confirmed.  An area could be infested and not be on the map.  There have been numerous examples of HWA going undetected for several years.  Early detection is key because it provides cheaper and more effective options for treatment.   If you believe you have seen HWA, please send an email -- with picture(s) if possible -- to hwa@nshemlock.ca

And these maps aren't telling us about the state of the trees in the western most part of the province where the first infestation took place -- many trees are dead and/or dying.  In many cases they are untreatable.  Once infested, our hemlocks deteriorate very quickly, typically living only 3-5 years.

Pesticide treatment is currently the only option for saving infested trees

If a hemlock becomes infested with HWA, the only way to prevent the tree from dying at this time is by applying a pesticide.  Ouch, that hurts to say and I wish there was another solution.  But that is the situation until biological controls are in place.

Three of the largest pesticide treatments so far include :
1- Kejimkujik National Park and National Historic Site ... "Since fall 2021, Parks Canada has treated 2,150+ hemlock trees at Kejimkujik NP and NHS. Treatment areas include high priority old-growth stands (1,200+ at remote Dennis Boot Lake) as well as important visitor areas (Jeremy's Bay Campground and Hemlocks and Hardwoods trail) with more planned this fall (Mill Falls day-use area and an area near Loon Lake falls) and even more in 2023" 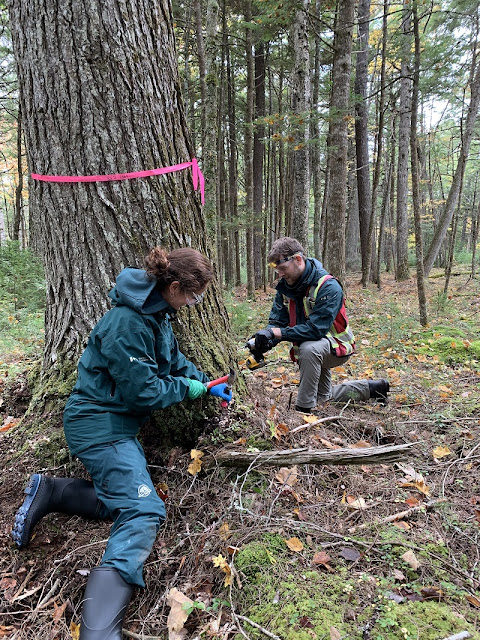 Applying pesticides at Keji (c) Parks Canada
2- Sporting Lake Nature Reserve : we had an update on this project two weeks ago at its one year anniversary, see : https://www.giantsofnovascotia.com/2022/10/sporting-lake-hwa-one-year-later.html  Just over 2,100 hemlocks were treated using volunteers.
3- Scott Robinson is currently the only arborist in Nova Scotia treating hemlocks and writes ... "What we're seeing is that most trees in Yarmouth and Weymouth Counties no longer have new growth. We often recommend that clients not treat them when they are that far gone as it doesn't make economic sense. About 5 percent of the trees on Ponhook Lake are past the treatment threshold as well.  We have worked almost exclusively for cottage owners treating between 1 and 300 trees." 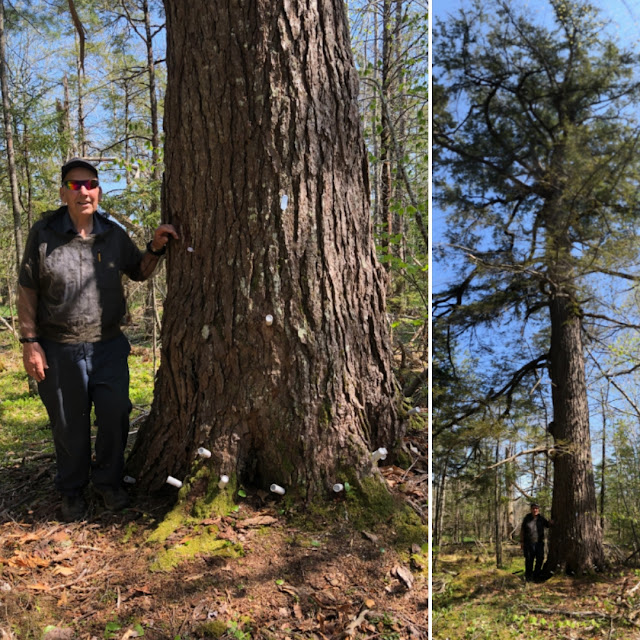 (c) Scott Robinson
Gary Marshall shown in the picture above first treated around 60 trees in 2021. Scott writes  ... "They are doing extremely well with new growth and dense canopies. The large tree I treated for him in the picture had some new growth this spring. It's really rewarding to see such a positive outcome and we're looking forward to doing treatment assessments in the spring."
And here is what the province has planned ...
"Over the next five-years, the province will be conducting chemical treatments to protect high-priority hemlock stands.  These stands have been ranked and assigned a protection priority based on a number of attributes or criteria.  These include:
This will ensure that only the highest priority stands with the  greatest ecological and cultural value are protected.  Similar to what is currently being done in Kejimkujik  National Park, chemical treatments of individual trees will be conducted to protect these areas.
Beyond the short-term protection of high priority stands using chemical treatments, outreach will also be conducted to provide  information on how landowners can detect HWA and protect trees on their own lands." 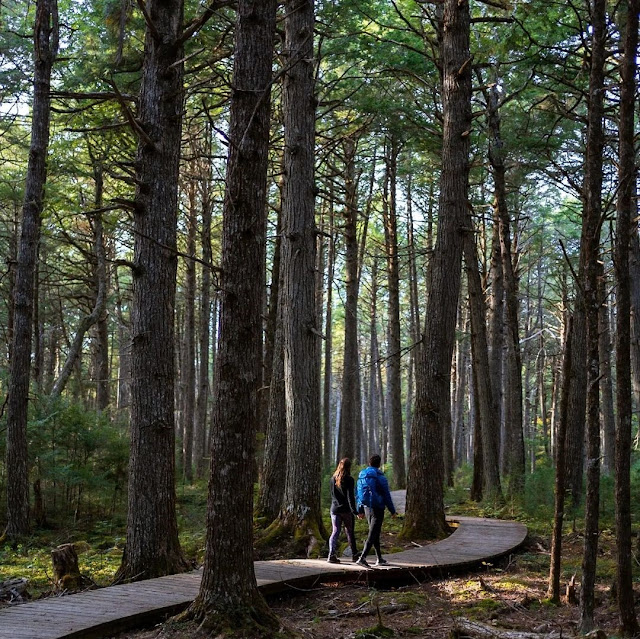 Chemical treatments are a short-term solution -- what about the long term?

British Columbia's hemlock trees and hemlock woolly adelgid (HWA) coexist -- how is that possible???  The west coast forest also includes predator bugs that keep the HWA in check.
Unfortunately, these bugs do not exist in our Nova Scotian forest.
So a simple solution would be to take the bugs from BC and introduce them to the Nova Scotian forest.
Not so fast ... before they can be released here, rigorous testing must occur to make sure they will not attack native species and they will be able to tolerate our cold winter temperatures.
Called "biocontrol", it is a long term solution developed over the next 5-10 years for protecting what will remain of Nova Scotia's hemlocks.
Nova Scotia is at the very early stages of this process, stating ... "funds will be used to explore biological control to provide long-term regulation of HWA populations and reduce damage to hemlock"
The challenge is to keep as many hemlock alive as possible until biocontrols are up and running. 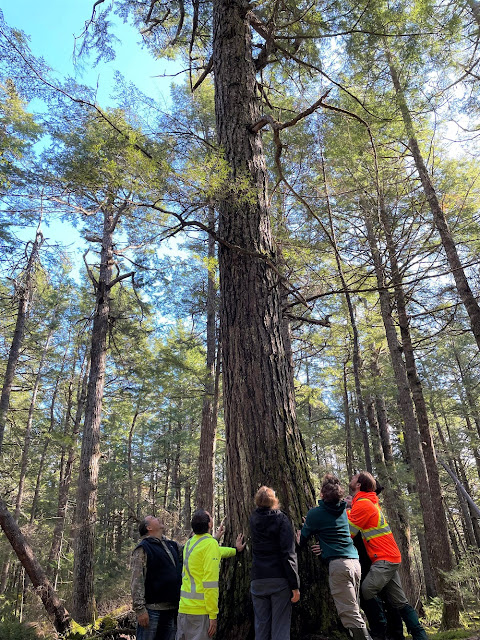 Blessing a newly treated hemlock at Dennis Boot Lake.  Will it be safe until biocontrols are in place? (c) Parks Canada
Actions you can take to protect our hemlocks

You can help stop the hemlock woolly adelgid (HWA) from killing our Nova Scotian hemlock trees in three ways:

1- PREVENTION : do not accidentally move HWA from an infested area to an uninfested area.

Fortunately, right now HWA is anchored to the hemlock branches and cannot move so the risk of spread is very small.

This all changes next March/April when the first generation of eggs hatch, with more hatching in the second generation through June-July.  The young HWA 'crawlers' start looking for a new home. Many thousands fall to the forest floor and on humans and wildlife as we travel about.

Look for a PSA in the spring with some suggested actions.

2- DETECTION : early detection of HWA means you will have more treatment options.

Now and into the winter is a good time for you to inspect hemlocks to see if there are any signs of the bug as it grows larger and more visible during winter.

Look for a cotton-like sac on the underside of the branch tips where the needle meets the stem. 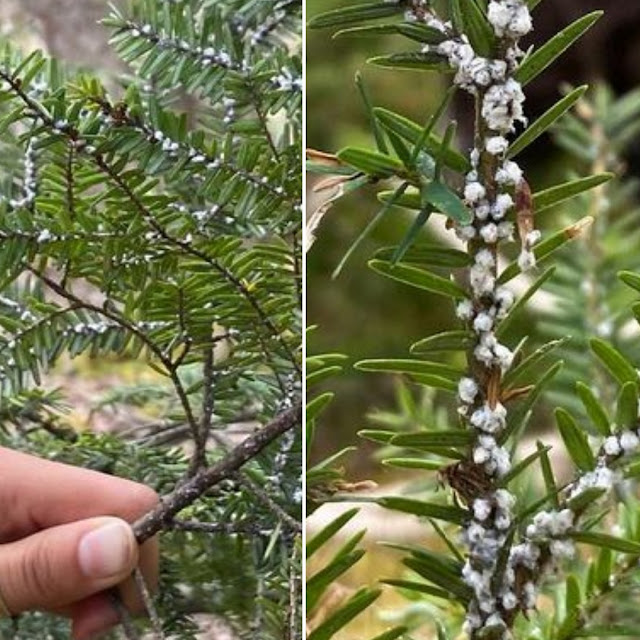 And if there is a wind or ice storm and hemlock branches are knocked down -- it is a perfect opportunity to inspect infestation levels in the upper canopy among the fallen branch tips.

If you find any signs of HWA, please get pic(s) of the underside of the branchlets and email it to hwa@nshemlock.ca

3- TREATMENT : if you find HWA, you will have to make some decisions.

Two pamphlets will help you. "A Landowner's Introduction to Hemlock Woolly Adelgid" is a good overview and HWA Treatment Decision Key will help you decide which trees are candidates for treatment.

As of the fall of 2022, you will have to contact a certified pesticide operator if you decide to treat your trees.  We hope to have an update on treatment options early in the New Year.

Hemlocks in Nova Scotia are in a fight for their life.  We can all do our part to make sure as many as possible survive so our grandchildren can experience the magic of an intact hemlock forest. 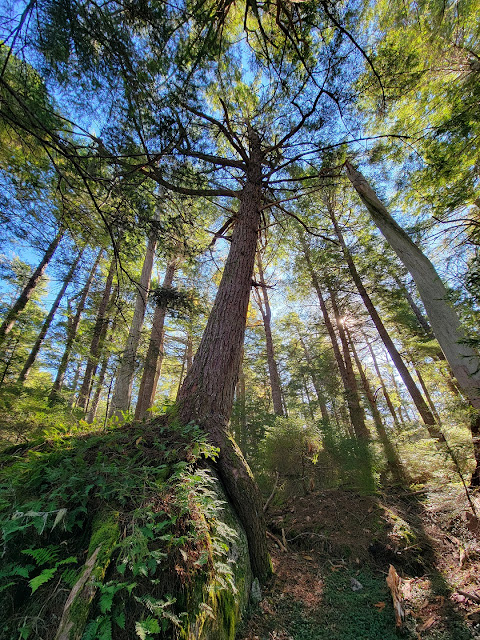 Hemlock on Sporting Lake one year after treatment (c) Martin Gray
In addition to the people mentioned above, many thanks to the following for their help with this post : Alicia Brett, Donna Crossland, Colin Gray, Jennika Hunsinger. Dan Lavigne, Ron Neville, Cal North, Matt Smith, Sally Steele and the rest of the gang at the HWA Working Group.
- November 06, 2022
Older Post Home