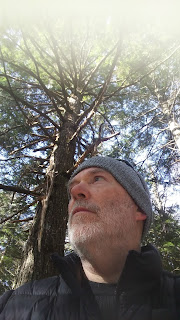 Giants of Nova Scotia is the personal project of Tom Rogers.  I started it in 2017 because I wanted to do something to prevent the spread of the recently discovered Hemlock Woolly Adelgid in western Nova Scotia.
* * * * *
Nova Scotia has some amazing trees and forested land.  But there's some non-native invasive pests moving in that could cause serious problems.

Infestations in the past that have affected our trees -- the American Chestnut in the early 1900s, Beech in the 1920s, Elms through the mid 1900s.

Based on what has happened elsewhere, these two bugs have the capacity to eliminate Hemlock and Ash from our forest :-(

My Objective is to show the beauty and diversity of our Nova Scotian Acadian Forest -- it really is quite spectacular -- and slip in a gentle message about how you can help prevent the spread of these bugs.

And the message is pretty simple -- acquire your firewood where you burn it because the bugs can hide in the bark and get a free ride from your backyard to a new location.  And that would suck.

Checkout my Instagram Page where you will find a collection of outstanding photographs of our Nova Scotia trees and forests by many very talented photographers.  I an very grateful for their generosity letting me share their images.

By all accounts, invasive species are something we have to learn to live with.  But we don't have to make it easy for them.

Thanks for your interest and help.