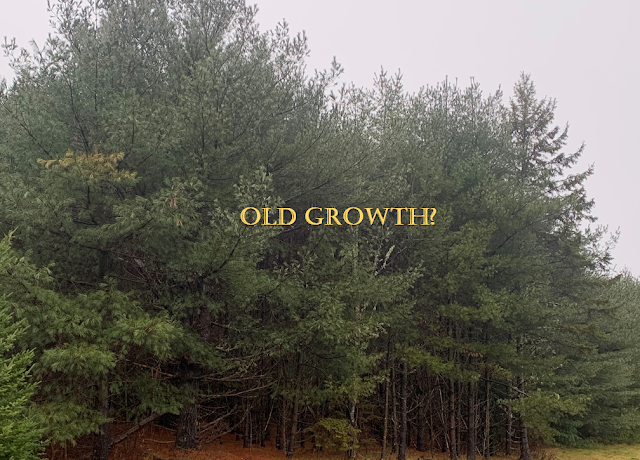 Longtime forest advocate Donna Crossland writes ... This stand of 'old growth' white pine features a forest structure we do not expect to see when we think of old growth, yet it was included in the previous Old Forest Policy and we are left to assume it is part of the 8 % old growth in the new Old Growth Forest Policy.

The government department entrusted to protect old growth -- the Department of Natural Resources and Renewables (DNRR) -- states that it has fully achieved 8 % protection of old growth in all ecodistricts across the Nova Scotia landscape.

These white pines were planted during the late 1970s-early '80s to restore an old field located at the entrance of Kejimkujik National Park and National Historic Site next to a helicopter landing pad.

Old fields are difficult to return to natural forest condition, with soils that bear the mark of the farmer's plough for centuries following agricultural abandonment, devoid of natural pit and mound topography and native biodiversity, and riddled with invasive earthworms that alter natural decay processes when they rapidly mix forest duff and incorporate leaf litter into the soil.

It will likely take two centuries or more for it to resemble a natural forest, if ever achieved at all.

Should this white pine plantation be considered part of the 8 % old growth?  Would you rather see some other stands that much more closely resemble old growth included in the 8 % that are not currently protected?

We have only until Wednesday, December 8th to submit comments on the revised 'Old Growth Forest Policy' by the DNRR.  You may submit comments by email to ecologicalforestry@novascotia.ca.

And with the criticisms by William Lahey last week over lack of genuine progress toward implementing a more ecological approach to forest management, you may wish to include sending your concerns to Minister of Natural Resources, Tory Rushton, mindnr@novascotia.ca.  Minister Rushton is taking this week to consider how the government may responds to their lack of progress toward ecological forestry and continued clearcutting.

'Mature climax' trees are being harvested while the department claims to have protected a sufficient amount of old growth to answer biodiversity needs.  Meanwhile this white pine stand on National Park lands has nothing to do with DNRR's achievement or management of old growth.