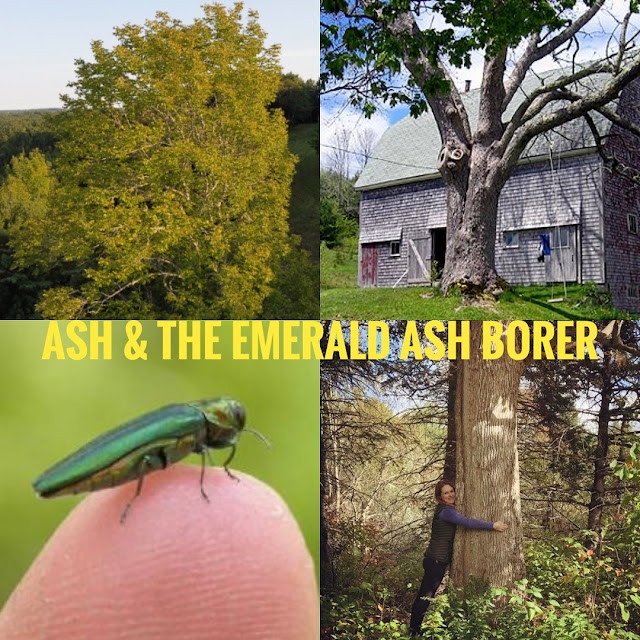 As fall approaches and the leaves start to change, it's the PERFECT time to identify ash trees in your neighborhood.  They are one of the first trees to change and their fall colours are very easy to identify.

So why know if there's ash in your neighbourhood?

A nasty little bug called the Emerald Ash Borer (EAB) was found in Nova Scotia in 2018. All sightings of the bug to date have been around Bedford Nova Scotia but there is always the risk that a new infestation could occur from the movement of infested wood.

Across Eastern North America, EAB has killed hundreds of millions of Ash trees since first being discovered in the early 2000s and some government estimates predict over 8 billion ash trees will die due to EAB.

The adult emerald ash borer (EAB) is native to Asia and was likely introduced to North America through wood products in the early 2000s. 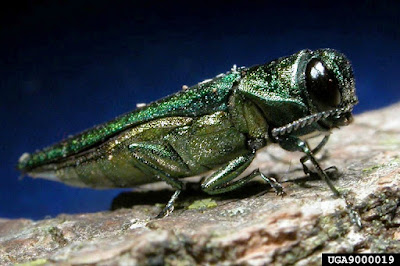 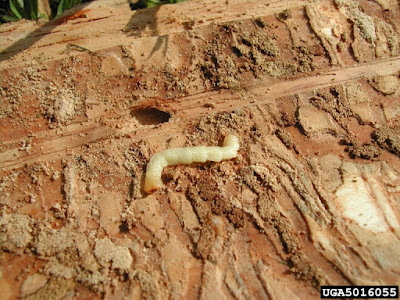 The larvae feed under the bark (Pennsylvania Department of Conservation and Natural Resources - Forestry , Bugwood.org) 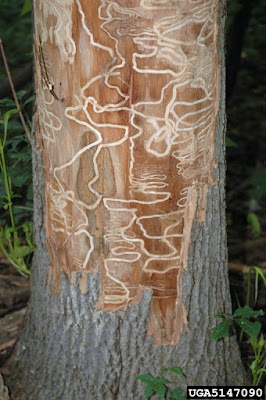 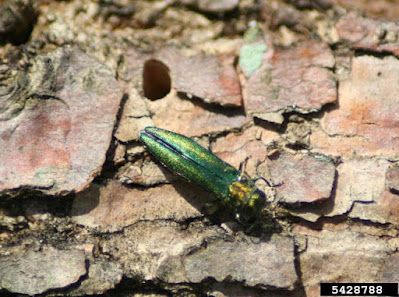 There are 4 native varieties of ASH in Canada, the most common one in Nova Scotia is the WHITE ASH. 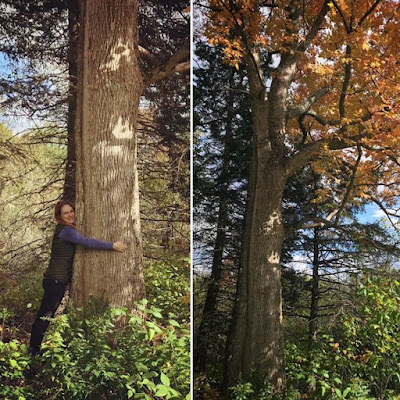 A lovely Nova Scotia ash tree, note the fall leaf colour on the rightside (photo used with permission from @soap_suds 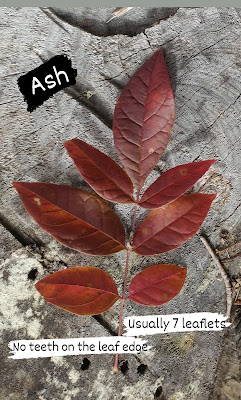 Ash leaf detail -- the leaf is composed of leaflets in opposite pairs and one at the tip. Usually 7 leaflets per leaf. No teeth on the leaflet edges or possibly a few rounded ones.  Colours : yellow, orange, red and purple.

Ash trees start to change colour around the middle of September and usually the trees are stripped by Thanksgiving. 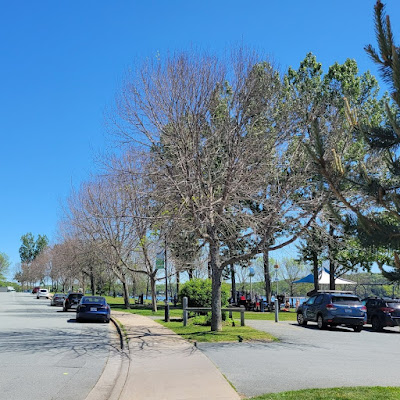 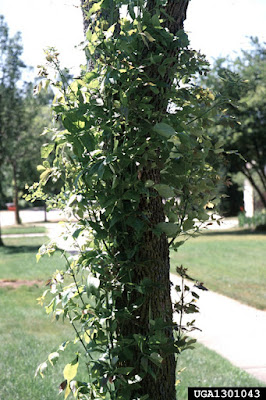 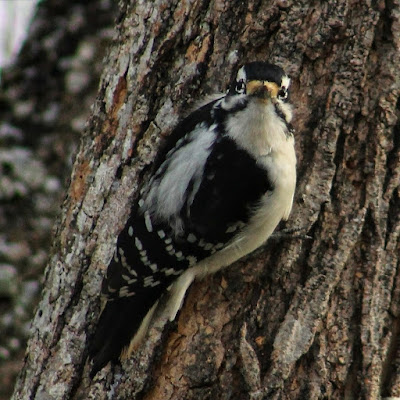 Lot's of woodpeckers (they could be feeding on the EAB larvae). 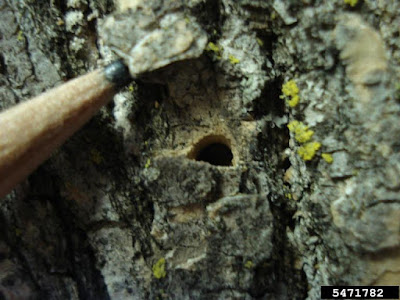 But Not Every Ash tree under stress is affected by Emerald Ash Borer!

Please note that Ash trees across Nova Scotia have also been affected by Ash Rust.  This has been widespread the past couple of years, some areas are detecting some stem dieback as well as isolated mortality. The rust is amplified by the damp and warm temperatures we have been experiencing. Most cases it doesn't result in mortality unless repeat infestations over a number of years. 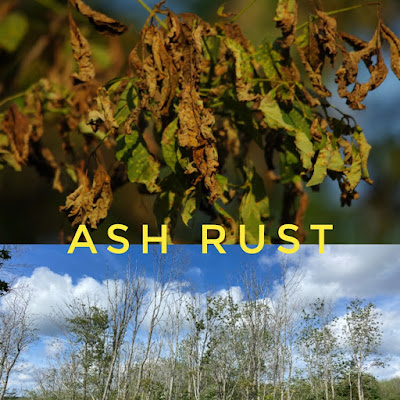 If you suspect it might be ash rust, contact : Foresthealth@novascotia.ca  Photo used with permission from the Nova Scotia Department of Natural Resources and Renewables

What is being done to prevent the Spread of EAB?

The province (Department of Natural Resource and Renewables) and the Canadian Food Inspection Agency collaborate to monitor of EAB throughout the province :

- traps around HRM to help determine the spread radius of EAB from the original Bedford site.

- baited flight intercept traps are setup in many areas outside of HRM as part of a province-wide network of traps.

- to help determine spread, branch sampling will occur this fall/winter looking for overwintering larvae within HRM but away from the known Bedford locale.

So far this years trapping within HRM has detected beetles in a number of sites within a 6-10km radius from the DeWolfe Park site in Bedford.  To date they have not collected any EAB samples from any traps outside of the HRM area.

What can you do to prevent the spread of EAB?
You can help by not moving firewood -- it could be hiding in the bark and you could accidentally move an infested piece of wood that could infest a new area.  Please acquire your firewood where you burn it.
Very important if you live in HRM where we know there are populations of EAB!!!
And if you think you may have found a tree(s) affected by the EAB in Nova Scotia, please report your sighting to the Canadian Food Inspection Agency by phoning 902-536-1010 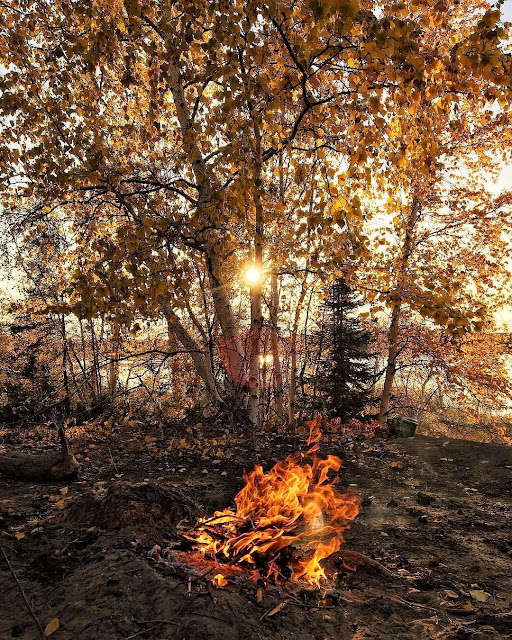