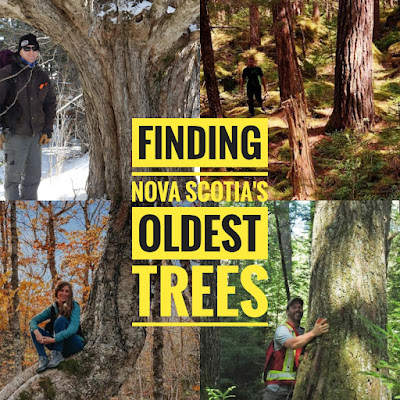 These trees would have been mature when settlers first arrived in the early 1600s.  And they are still here!

How do you know the age of a tree?

It is logical to assume that a bigger tree must be older than its smaller neighbour.  In this case, logic would fail you.

Each year a tree grows out from the centre adding one ring.  The width of the ring is affected by many things such as the tree species, whether it is in full sun or growing amongst many trees and the amount of rain

How do forest researchers determine the age of a tree?  They have a special drill that has a bit with a hollow core.  When they drill into the centre of the tree, they can extract a sample that shows the growth rings.  Count the rings and you know the age of the tree.

How do trees reach old age?

To see the sun rise and set 182,500 times requires many things -- like a good place to plant your roots and the ability to deal with our harsh Nova Scotian weather and winds.  You also have to be very strong and this happens, ironically, when trees have to struggle.

If you look at the growth rings of a white pine grown in the open, notice the relatively wide space between the rings indicating that the tree added a lot of growth that year.  The quarter covers about 3 years of growth

Compare that to the growth rings of a hemlock where the quarter covers over 25 years of growth rings. 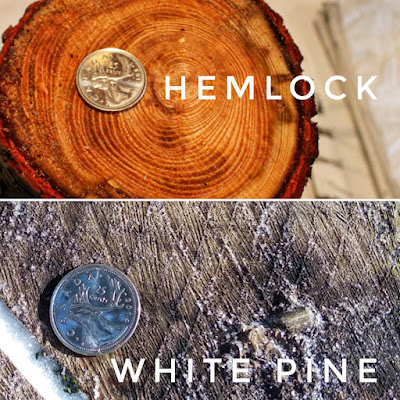 This is very important for reaching old age because in general, trees like hemlocks that grow slowly with tight growth rings have very dense and durable wood -- a key ingredient for surviving our harsh, windy climate for 100s of years.

How can you spot an old tree?

Let's first eliminate the ones that won't be the oldest.

Single trees grown without neighbours develop a full crown covered in leaves that feed the tree enabling it to grow very quickly.  Big yes but probably not the oldest.

And some trees will never get old.  They just don't live that long.  Softwoods like balsam fir and white spruce rarely make it to 100.

Then there are the trees that have been crippled by invasive species like elm and beech.

And because a struggle made them stronger, they probably are part of or were part of a forest.  There probably are not many lower branches because this would mean the tree was in full light earlier in their life.

Other signs include a small top or crown with relatively few leaves or needles.  Also, the bark has cracked and shed over time creating unique looking bark with larger plates or an uncommon colour.

I think I found a really old tree, what next?

400 years of forestry has affected just about every corner of Nova Scotia's forest.  Chances are the really old trees will be in a remote location that was not cut such as the side of a steep hill or in a river valley.

Clues that it may be very old are the size of its crown and condition of its bark but also the characteristics of the surrounding forest.  Mixed-age stands with trees of various heights and multiple species can suggest the forest hasn’t been harvested in a long-time.

And the best thing you can do for the tree?  Leave it alone.  Don't broadcast your find or the location.  Traffic to the site could lead to its demise.  Many old giants have succumbed to human obsession.  'The Golden Spruce' is a recent, Canadian example.

It can be your secret.

A big shout out to all the photographers for permission to repost their awesome images, you can see them all at our Instagram and Facebook pages.