To Save the Hemlocks at Sporting Lake 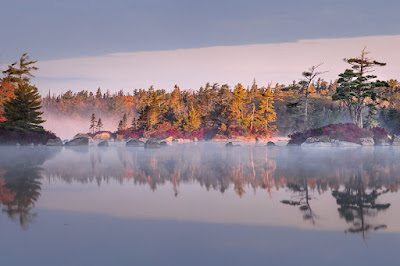 During October 2021, an eclectic group of volunteers took an arduous journey to Nova Scotia's most remote inland wilderness to save a mature hemlock forest from imminent death. 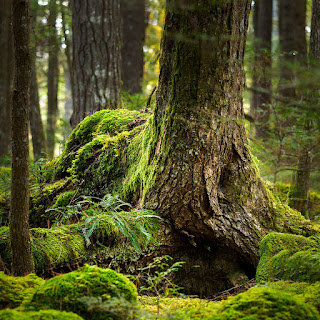 Commercial forestry started in Nova Scotia in the 1630s and four hundred years later most of our forested land has been cut over.  Sporting Lake is what happens when a forest is left alone.  Some of these Giants are 500 years old.

Hemlocks provide many important roles in the forest, for example their dense canopies provide habitat for a variety of birds and protection from the snow for mammals like deer.  Often found along waterways, they filter and slow water runoff.  And anyone familiar with hemlock knows the wood is very heavy -- it stores a lot of carbon, an important trait at this point in time. 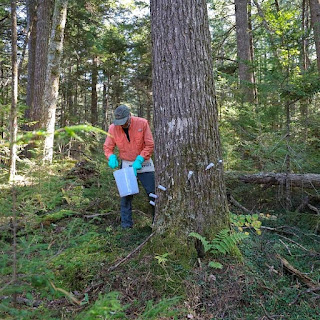 HWA is very prolific and typically kills the hemlock within 5-10 years.

At this time, the only way to protect a hemlock from HWA*** is by inoculating  (CORRECTION : should say "injecting the stem of") the tree with a pesticide.  Holes are drilled into the trunk of the tree where a pesticide is injected.

***HWA is affected by extreme cold, many nights of -20C will slow it down.  Unfortunately, this is not the trend with our winter temperatures. 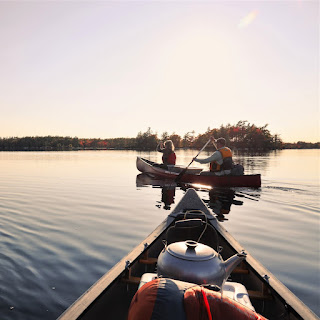 A passionate, eclectic, ad hoc group came together to try and save the hemlocks at Sporting Lake Island.

Arborists, scientists, foresters and a diverse assortment of volunteers made the challenging trip to undertake the labour intensive process of injecting the stem of every hemlock.

Over a three week period, over 2,000 trees were treated. 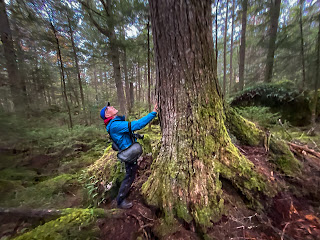 So what happens next?

Groups involved with the Sporting Lake project are working on best practices to deal with HWA on private and public land.  I'm planning an update with details in the New Year.

Stem injection of the hemlocks at Sporting Lake Island will provide valuable information about using this technique for individual and small groups of trees.  But stem injection is not a solution for the forests of Nova Scotia.

There are some promising solutions long-term five years out.  So its very important to slow the spread until the long term solutions are available. 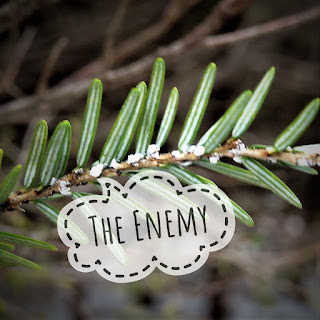 1- Early identification of an infestation is key.  Know what the enemy looks like -- cotton like balls on the underside of a hemlock branch close to the stem 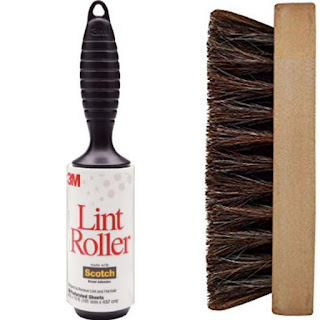 So please -- acquire your firewood where you burn it.

And if you are in an area known to have HWA (like Keji Park), before you leave the park wipe down your gear, clothes and pooch with a lint brush and brush off your footwear.

It's the new normal to prevent the spread of invasive species.

Awesome effort by everyone involved in the Sporting Lake project.  To accomplish so much on such a short timeline is a tribute to the passion people have for our forests ... and that is encouraging

More perspective on the project : https://www.saltwire.com/atlantic-canada/opinion/john-demont-how-the-power-of-people-saved-a-stand-of-threatened-nova-scotia-hemlocks-100654779/